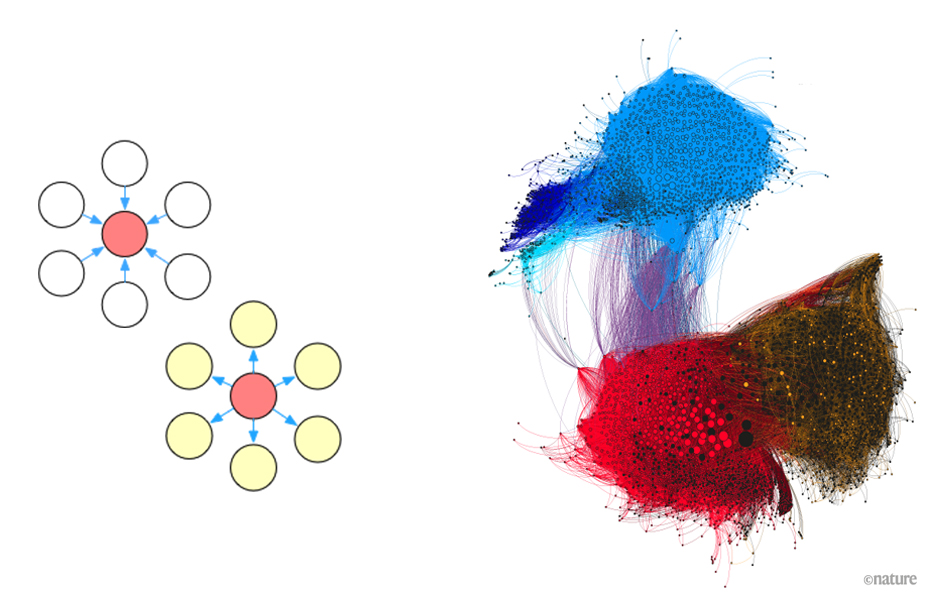 In a single machine environment, developers can easily implement sequential solutions to these algorithms as they have a global view of the graph and can freely iterate through all vertices and edges. Current graph data in real industrial scenarios usually consists of billions of vertices and trillions of edges. Such a graph has to be divided into multiple partitions, and stored and processed in a distributed/parallel way. To allow developers to succinctly express graph algorithms under such environment, many programming models for parallel graph processing have been proposed. In this post, we would like to introduce some commonly used programming models, and further discuss their pros and cons.

The vertex-centric model proposed in Pregel[1] follows the philosophy of “think like a vertex”, where each vertex contains information about itself as well as all its adjacent edges, and the computation is expressed at the level of a single vertex. More specifically, the entire computation process is divided into multiple iterations (called supersteps), and in each superstep, all vertices execute the same user-defined function (called vertex program) that expresses the logic of a given algorithm. The vertex program defines how each vertex processes incoming messages (sent in the previous superstep), and sends messages to other vertices (for the next superstep). The iterations terminate until no messages are sent from any vertex, indicating a halt. 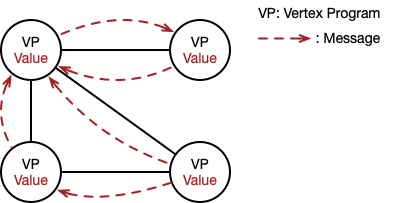 With the vertex-centric model, the vertex program of single source shortest paths (SSSP) is expressed as follows.

However, the performance of Pregel drops dramatically when facing natural graphs which follow a power-law distribution. To solve this problem, PowerGraph[2] proposed the GAS (Gather-Apply-Scatter) programming model for the vertex-cut graph partitioning strategy. The Gather function runs locally on each partition and then one accumulator is sent from each mirror to the master. The master runs the Apply function and then sends the updated vertex data to all mirrors. Finally, the Scatter phase is run in parallel on mirrors to update the data on adjacent edges.

Following the GAS abstraction, the SSSP can be implemented as follows.

The SSSP is expressed as follows in the subgraph-centric model.

To make parallel graph computations accessible to average users while achieving high performance at the same time, the PIE (PEval-IncEval-Assemble) programming model[5] is proposed. In this model, users only need to provide three functions,

The PIE model works on a graph G and each worker maintains a partition of G. Given a query, each worker first executes PEval against its local partition, to compute partial answers in parallel. Then each worker may exchange partial results with other workers via synchronous message passing. Upon receiving messages, each worker incrementally computes IncEval. The incremental step iterates until no further messages can be generated. At this point, Assemble pulls partial answers and assembles the final result. In this way, the PIE model parallelizes existing sequential graph algorithms, without revising their logic and workflow. 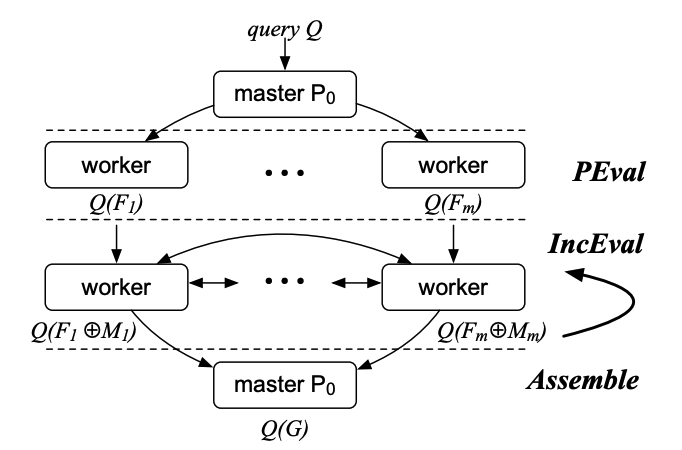 The following pseudo-code shows how SSSP is expressed in the PIE model, where the Dijkstra’s algorithm is directly used for the computation of parallel SSSP.

Currently, the PIE model has been developed and evaluated in the graph analytical engine of GraphScope. On the LDBC Graph Analytics benchmark, GraphScope outperforms other state-of-the-art graph processing systems (see link). Welcome to try and develop your own graph algorithms with GraphScope.